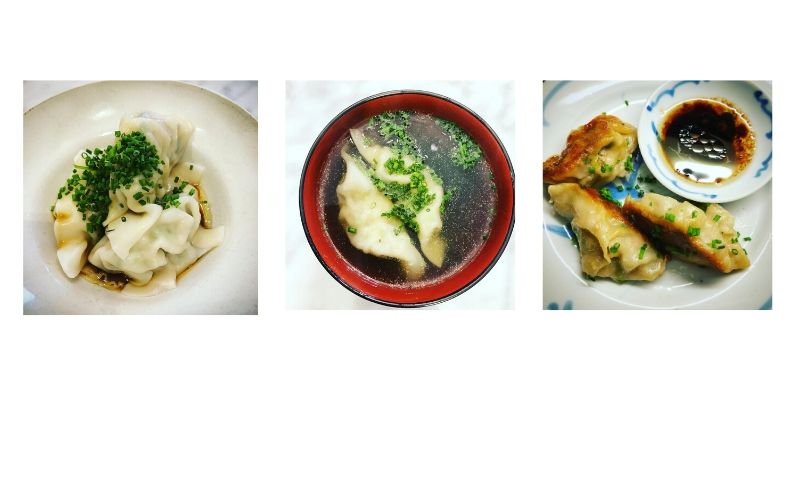 I was lucky enough to be given a gift voucher for a ‘significant’ birthday to attend a Japanese cookery course at Yuki’s Kitchen in London.

When I went online to find Yuki’s website, I realised I was in for a real treat! Yuki Gomi is known as one of the best Japanese cooks on the planet!! The hardest part was choosing which course to do, as she offers Ramen, Sushi or Gyoza. In the end I decided on Gyoza, as these have to be one of my most favourite foods. So ‘Gyoza Three Ways’ it was!

I set off to London on a wet and windy Thursday in January, crossing the city and arriving at Crystal Palace station, before jumping in a cab to find Yuiki’s home/cookery school. When we arrived we were met with a very warm welcome, and offered some barley tea, a Japanese favourite and the most drunk brew in Japan.

Once everyone had arrived, Yuki ran through what we would be making in the class. As well as making Gyoza served in 3 different ways, we would also be making Miso Aubergine (Nasu Miso Dengaku) and Broccoli & Walnut Salad. We began by preparing the aubergines – making cross scores with a sharp knife in a diamond pattern. at this point I had serious knife envy as Yuki described her Japanese knives to us and how she sharpens them on a special wet stone. The aubergines were then ‘massaged’ with sunflower oil and placed cut side down on a baking tray lined in foil and greaseproof paper, and baked for 20-25 minutes. They were then briefly turned over and cooked for another 5 minutes. We left these for a while to prepare our gyoza filling.

Knife skills were then practiced further as we chopped and diced cabbage, chives, coriander, garlic, ginger, water chestnuts and spring onion before adding these to the minced pork to create our filling. A vegan in the group got to use oyster mushrooms and sweet potato in place of the pork. 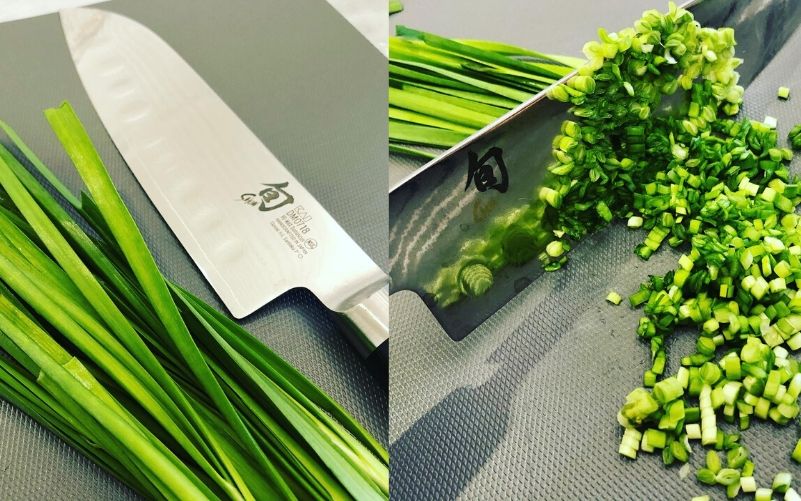 Next came the creative art of filling and folding the dumpling, which was great fun, but quite tricky! There is a real knack to doing this, and Yuki showed us how to begin in the middle, folding to the front edge in a pleat, then repeating this on each side. Some of our dumpling were better than others, and we certainly had plenty of practice with hundreds of gyoza made between the 9 people on the course. Once the plate of gyoza was ready, we began to prepare them in the 3 different ways.

Firstly came the steamed dumpling or Sui Gyoza. The cooked dumpling were served with a lemony yuzu sauce and chopped chives. Secondly we made a light broth or Japanese ‘Dash’ stock using seaweed, coriander, sake and mirin for our Gyoza Soup, and finally (my favourite and the most attractive) were the pan fried gyoza with their distinctive crispy brown side.

We were treated to a Miso tasting of Yuki’s homemade fermented soybean paste as we chose which one we preferred to use on the aubergine. We all preferred the medium brown miso which Yuki makes by the kilo load, and we used this to make the final sauce to glaze the aubergines with before cooking them for a few more minutes in the oven to make the glaze bubble. A final garnish with Japanese Seven Spice Chilli and these delicious beauties were ready to devour! 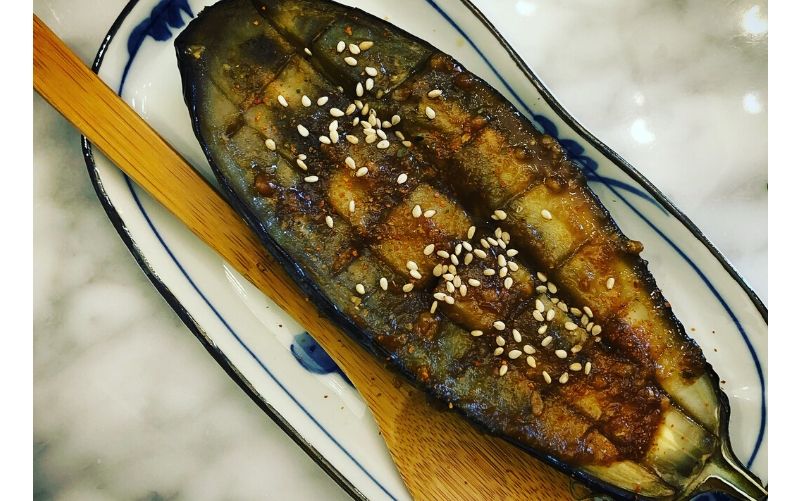 The next treat was a delicious broccoli salad with a walnut dressing. Blanched broccoli was literally shown some boiling water for a couple of minutes before being refreshed in cold water. Then a fantastic dressing made using walnuts, tahini, honey, brown sugar and soy sauce was added. I could have eaten this with anything – a useful and versatile sauce which would be delicious with many things. 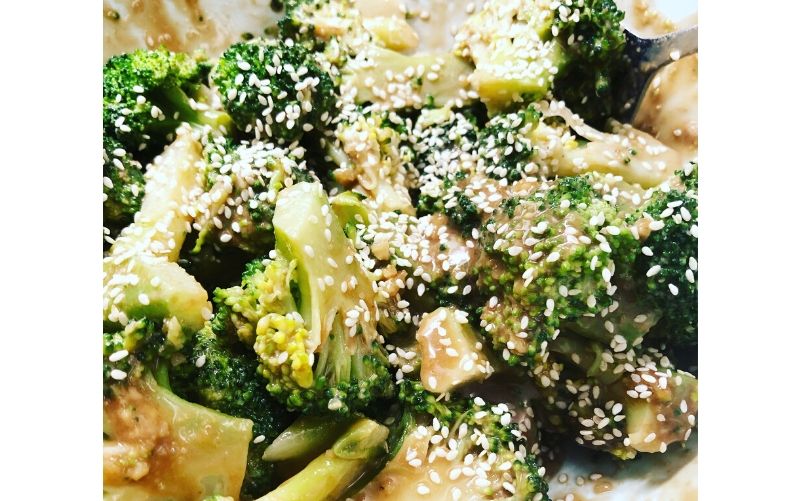 Each time a dish was finished and ready to serve, or she required some ingredients, Yuki went into the floor to ceiling cupboards lining her kitchen and out came jars, bottles, bowls and dishes, spoons and chop sticks and my friend and I could not take our eyes off the insides and how they were laid out. Marie Kondo eat your heart out – they were certainly beautiful cupboards!

After eating the delicious broccoli salad we tried the first batch of gyoza, followed by the soup which was garnished with sesame oil and sesame seeds. Then came the steamed gyoza which had a completely different texture to the first batch, despite being the same base dumpling. Finally the pan fried ones stole the show with their impressive ‘crusts’ gently browned on one side, and there were even a few left over to take home.

I thoroughly enjoyed my cooking experience with Yuki and I can’t wait to try making gyoza at home for my friends. What a brilliant birthday present! 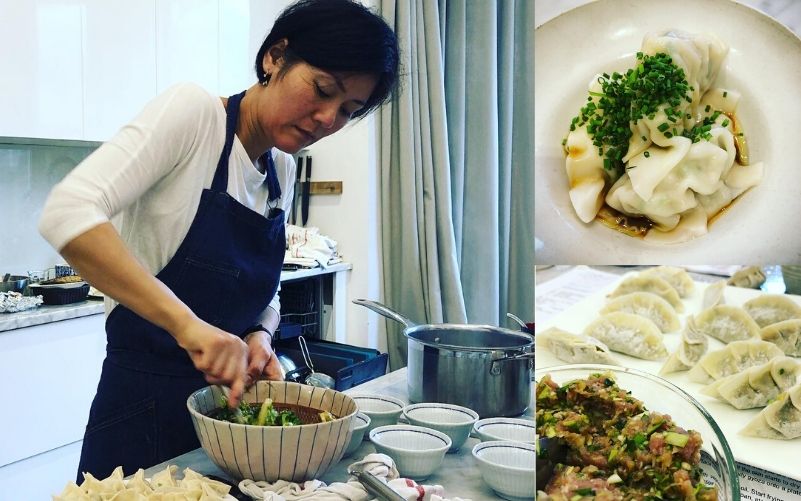